The challenge from Fathi Alriyami and Mark Sivy at Cosmic Surrounding Technology was fascinating:  Create an environment inspired by Arabic architectural traditions for a client in Muscat Oman, but not too literally, and it should be somewhat futuristic and modern with a ‘wow factor’ that would be interesting to international youth for their annual Muscat Youth Summit.

The truth is, I’m a nerve racking designer to work with.  While Fathi, Mark and the rest of the team at Cosmic anxiously awaited design sketches, I was instead asking lots of annoying questions, of myself, and of the client.  What are they really going to use this space for, and is anyone really going to use it?  What do you want the visitor to see (and feel) first, last  and along the way?  What exactly does modern Arabic-inspired architecture look like?  It helps to study the traditional forms and masterpieces, old and new, to really internalize the what and why of an architectural language.

On top of that, I tend to think in spirals.  Just when I’m finished thinking through the challenge, I’m circling back to: why a virtual world?  What really is interesting to youth?  What will people actually see and do when they visit this space?

Then there are important philosophical questions about what virtual architecture really *is*, and what it should be.  Should it be familiar and physical looking, as one would expect in the real world?  Or, should it somehow evoke it’s virtuality and challenge the norms and expectations of ‘architecture’ as it transcends the physical world into virtual space?

I use a kind of stream of consciousness method at this point, pen on paper sketching anything and everything that comes to mind.  Below is one scan of about a dozen pages of schematic sketches for this project.  You can actually see hints of each eventual design proposal in these sketches. 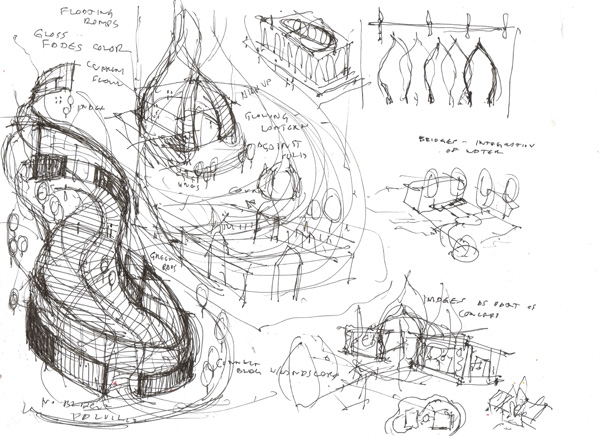 By the time I’m done sketching, I generally have a solid vision of what I want to model in 3D.  There is certainly widespread debate in design circles around the value of showing loose sketches or polished models to the client.  I almost always tend toward more polished models, operating under the assumption that most clients can’t visualize what a final form will look like when reviewing a sketchy pen drawing.  I’ve also become much more versed in 3D modeling than any other medium, and it really doesn’t take long to generate schematic level models.

This is a distinct advantage of virtual design.  Whichever concept they choose, the sketch model can eventually become the virtual architecture. With a painless jump from Autodesk Maya into Unity3D, they can be standing inside the model walking around.

Below is Concept 1.  You’ll notice nothing is necessarily ‘traditional’ about any of these designs, but this is the most traditional of the 3.  It has defined ‘buildings’ with smaller tempieto, or open garden pavilions at each end of a central axis.  I removed the roof of each exhibit hall and replaced them with a translucent, glassy plane with an arabesque pattern.  Islamic arch forms are used throughout the design, and large open plazas with reflecting ponds surround the buildings. 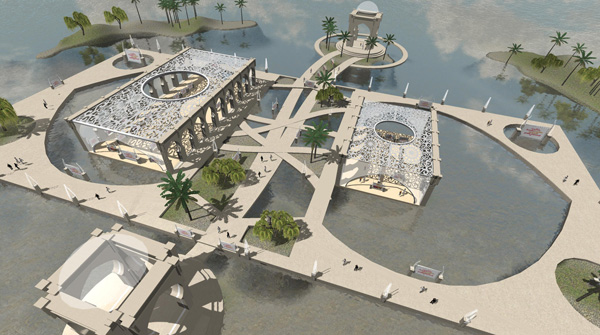 With concept 2 (below), I was thinking more about the visual characteristics of arabesque patterns, combined with the weightless, free-flowing forms made possible with virtual architecture.  Perhaps balancing traditional ground-level pathways with a central sculpture that couldn’t possibly exist in the real world (well, Zaha Hadid could do it, but I digress).

Here, I’m also thinking more about the visitor experience.  This environment utilizes the Jibe multi-user system with Unity3D.  I’ve built several environments with this platform, and have observed time after time that visitors generally tend to ‘sprint’ on arrival.  First, they log in, and start walking, then running, and they proceed to sprint around the entire build.  When they’re finished, *poof* they’re gone.  This all takes between 20 and 30 seconds.

Maybe this sprinting behavior can be designed for?  What if the whole build was something like a giant track they can run around?  That way, we can place the content along the track in hopes of enticing them into stopping for a few seconds and absorbing the content.  I wager that if they had chosen this concept to build, that’s precisely how it would be used 9 times out of 10 for new visitors.  They would spawn at the orientation point, run a lap, and vanish. 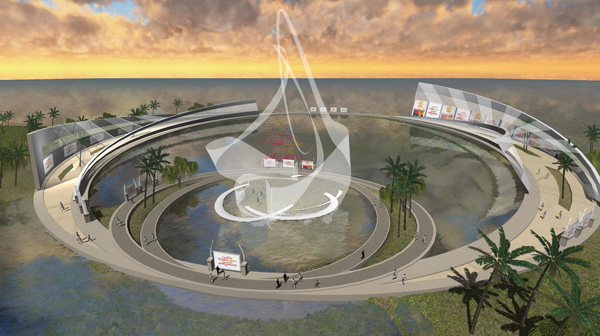 But what if we make the path just a bit more interesting, adding a few curves and incorporating 2 or 3 layers of track pathways to explore?  Another observation I’ve made with prior builds is that visitors tend to seek the outer limits of the build.  Like clockwork, a new visitor sprints around the build, then starts wandering farther out to see if they can find the outer edge.

Maybe that tendency can also be designed for?  We can give them what I think of as a ‘yellow brick road’ for finding the core content, but then perforate that path with walkways that lead to distant locations.  Then, we can open up the architecture at various points to frame vistas or views to these distant places.  This sets up the expectation that there is always something more to see and experience beyond the core content of the exhibit itself.  When the primary activity in a virtual world is running and flying.. then make running and flying as fun and interesting as possible!

Formally, this design is also a study in curving arabesque style with a similar balance of physical and virtual.  The solid metal base curves feel very solid and grounded, defining the pathways and reinforcing the overall functional spaces, while the light, translucent, virtual pieces lace in, around and above those solid plinth elements. 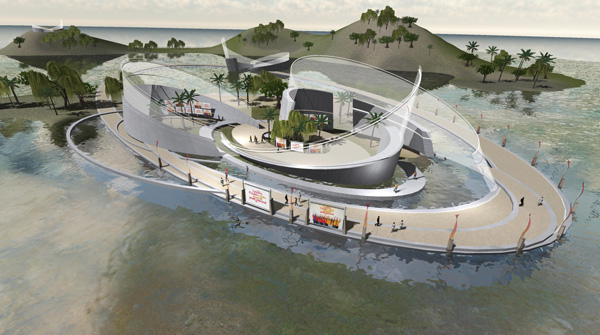 Fathi presented these renderings to his client, and they chose Concept 3.

I then started to dial in on specific functional elements like orientation, auditorium, main exhibit, sponsor exhibit, smaller meeting spaces, etc.  I had kept these spaces in mind throughout schematic development, but now it’s time to figure out exactly where they go and what they look like.

Visitor orientation is vitally important in any design, but in virtual worlds it becomes especially important when most new visitors will have never been in a virtual environment and need to find their way around.  Again, this ‘yellow brick road’ approach becomes really important to ensure they can easily find their destination without getting lost or frustrated.  Each functional element lies on this path, and is positioned in such a way that reinforces the client’s priorities in how soon the visitor accesses each space.  In this way, the experience is ‘choreographed’ to a certain extent. 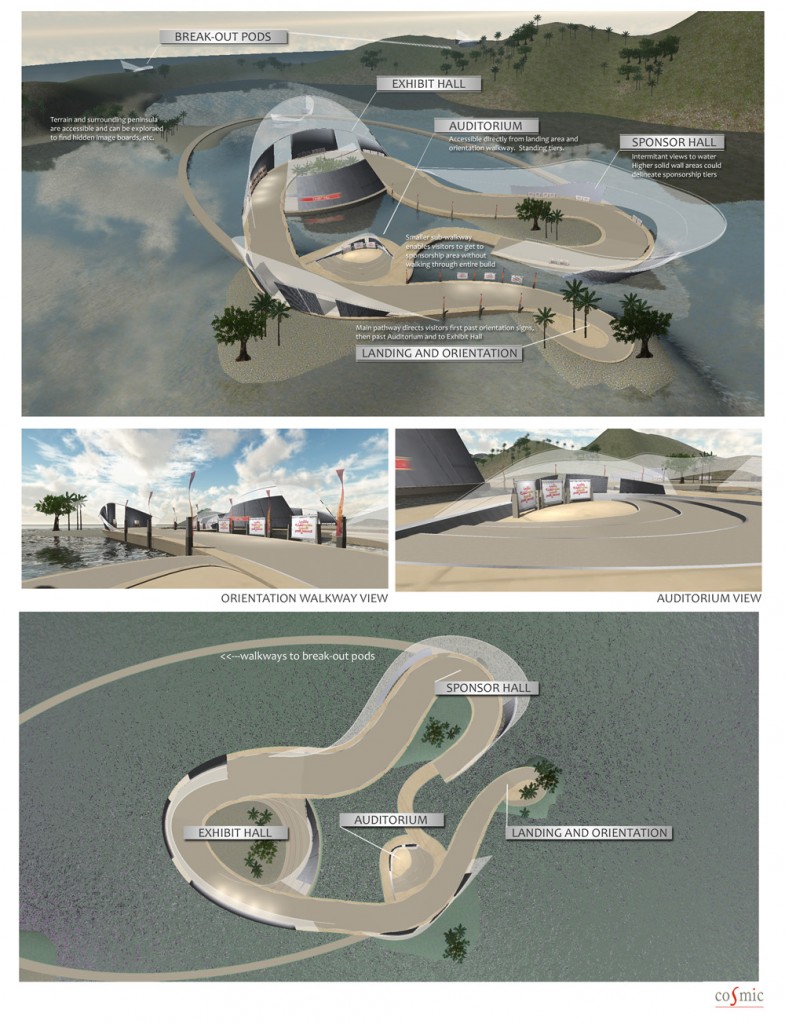 Below, you can see the build on the website landing page.  You can visit the build here: http://www.muscatyouthsummit.com/virtualexhibit.asp

The frame on the right changes dynamically depending on where in the exhibit you happen to be exploring.  For example, some sponsors have ‘Interactive Zones’ by their graphic, which brings up their logo in the side panel with a link to visit their website.  There is also a message from the Sultan of Oman, His Majesty Sultan Qaboos bin Said, addressing Youth.  You can read his message by walking near his photo near the initial exhibit landing point.  You can read more about how to set this functionality up on John Lester’s blog (here).  This also makes it easy to play video associated with the environment, which you can see by walking near the auditorium space and playing the YouTube clip in the side frame while you’re in the Interactive Zone. 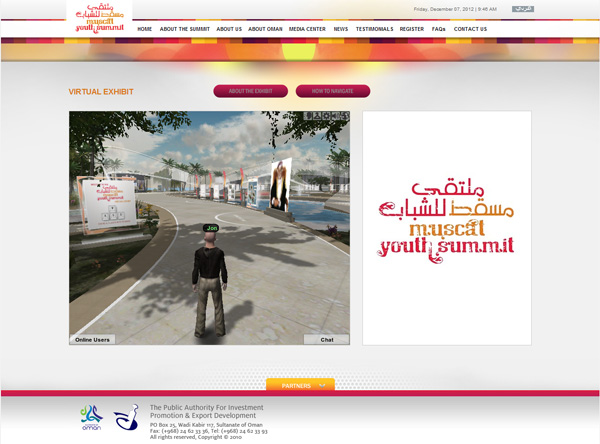 From a technical perspective in Unity3D, the build uses a combination of Occlusion Culling, Lightmap baking and runtime combining to improve performance.  Vegetation from the Unity Asset Store combines with custom textures and materials generated specifically for this project.  Sounds were used with 3D reverb effects to help create a spacial experience.

All in all this was a very rewarding project to work on, and I enjoyed collaborating with Fathi and Mark very much.  The exhibit opens this week in Muscat, so I look forward to seeing how the space is used, and how it will evolve over time.